Here is the Primate’s Final Communique and the draft of the proposed Anglican Covenant.
Go here for the final communique, which deal with The Episcopal Church a little more harshly.
The Anglican Covenant cover page begins:
Report of the Design Group
Introduction to the Draft Text of the Covenant
A Proposal for a Text of the Anglican Covenant
The Status of this Document
This document is the Report of the Covenant Design Group and includes a draft text for a possible Covenant proposed by the Design Group for discussion. It has not yet been officially adopted by any of the Instruments of Communion and is not offered for approval or authorization but released for wider consultation and debate. It was received and debated by the Joint Standing Committee and the Primates and changes are already proposed.
Read it here.
Download it in .pdf format here.
My initial take – well, it isn’t bad. It makes me nervous when at any time I think I am giving over autonomy. It was VERY difficult for me to vow to obey my bishop. VERY difficult, but I did it with complete intent because this is how this Church conducts its affairs, and I believe that I am called to this Church at this time. So, I make my vow, and I mean it, despite how it makes me feel at times.
We are not really giving over any actual autonomy. The four Instruments of Communion will take on new responsibilities, and will be given new types of authority as we live into the Covenant. Of course, this is only the draft. I’m sure changes will be made.
It does sound more Evangelical/Protestant than Catholic, but there is room for both. It does seem to take on a more centralized point of reference concerning new teachings or interpretations of Scripture that may cause particular concern or trouble for other Provinces. There does not seem, however, to be a mechanism for the Instruments of Communion to attempt to force a particular point-of-view on another Province, except for the removal of the particular Church from the Communion. That can be done, now, so it isn’t a big departure. Time will only tell what kind of authority is granted to the Instruments of Authority when such problems occur in the future.
If this is passed right now, I could live within it. The problems will come when my “living within it” does not match other peoples’ definition of “living within it.” Then, we are right back were we started. 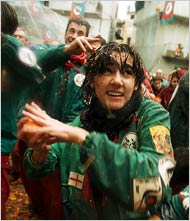 There is an article in today’s New York Times covering the ancient Lenten tradition of “pelting one’s neighbors with oranges” found in Ivrea, Italy.

The carnival is a bizarre and messy affair and, like most everything in Italy, has a long story behind it. One version has it that feudal lords gave pots of beans to the poor, who began throwing the beans back into the streets out of disrespect for such meager charity.
But a far more interesting account tells of a population incited to rebellion by the violent act of a woman who, as the yarn goes, was only protecting her honor. That woman was Violetta, a young commoner who presented the head of the local tyrant â€” Marquis Raineri de Biandrate â€” to her fellow citizens from the castle balcony after he tried to steal her virginity on the eve of her wedding.
This practice of noblemen claiming a right to enjoy a betrothed woman before her husband did was certainly not exclusive to this place. But it is said to have been exercised quite regularly by that marquis, much to the chagrin of the women and their families. The citizens, empowered by Violettaâ€™s defiance, stormed the castle and burned it to the ground.
The carnival is rich in costumes, music and symbolism. The oranges of the Ivrea battles represent the head of the marquis. The pulp and juice are his blood.
â€œItâ€™s a festival that represents the people against any type of oppressive power,â€ said Roberto Vola, 43, as he tried to speak over the roll of kettle-drums and the blare of techno music.

Now, this may be a stretch, but it got me thinking about “nation building” and our attempts to establish democracies in Afghanistan and Iraq. Admittedly, both efforts are still in effect and the end results will not be realized for a while yet. So, there yet may be success as defined by the U.S. administration.
This story of throwing oranges points to a consideration: freedom must be won by those who will experience or live within such freedom. These Italian towns people of antiquity rose up and fought the marquis and rebelled against the status quo of oppression. Most examples of the establishment of democracy show that the local populations rose up against the oppressors and forged a new social and political world for themselves.
Now, I’ve heard it said that places like Japan and Germany are examples of nation states where democracy was “imposed” upon the populous for their own benefit. Well, that may be true as it goes, but these places were utterly destroyed during WWII. Germany already had some experience with democratic processes. Japan was an extremely hierarchical social system and if the emperor said this is how it was going to be, then that is how it was. The emperor surrendered to the Allies, and the American’s institute a new democratic system quite contrary to the people’s experience.
This has not happened in Afghanistan or Iraq. For these two regions to move into democratic systems, they will have to win it by their own initiative. We cannot impose it upon them because of their own cultural realities. They have never known democratic processes. The Taliban will probably take back control of much of Afghanistan, regrettably. I heard last night that the Taliban are now bombing girls schools in an attempt to stop the education of females (which was official policy when they ruled the country). Iraqis needed to rebel against Hussein themselves.
They need to start throwing their own oranges.
This may mean many more years of oppression and there are things we can do to help the locals, but we cannot do it for them.

This, from a recent online article from The Living Church (an independent Episcopal news magazine) covering yesterday’s Sunday Eucharist for the Anglican Primates meeting at Christ Church Cathedral in Zanzibar:

Over 600 worshippers packed the Cathedral, built in 1878 on the site of Zanzibar’s former slave market in Stone Town. Archbishop Williams served as preacher, Archbishop Donald Mtetemela of Tanzania served as celebrant and the bishops of Zanzibar and Dar es Salaam served as deacon and sub-deacon in the elaborate Anglo-Catholic service which was conducted in both English and Swahili.
In high ritual style, Archbishop Mtetemela sung the liturgy, as clouds of incense arose from a censer held by the former Archbishop of Zanzibar, John Rahamdhani. The altar service reflected an ecclesial style seldom seen in The Episcopal Church, with copes, maniples, zucchettos and other finery. Yellow roses covered the front of the altar and much of the cathedral in honor of Quinquagesima Sunday.”

(emphasis mine)
Well, they are right, this kind of thing is seldom seen in The Episcopal Church these days, except for the cadre of High-Church and Anglo-Catholic parishes that are faithfully making their way forward. The overall Church, however, is far more high-church (high-ritual or “Catholic”) than it was 40 years ago! There are those who say that Anglo-Catholics “won the battle but lost the war,” meaning that a good bit of the style of high-worship has been adopted by the wider church (Eucharist every Sunday, sung Eucharist, vestments, etc.), but all the depth behind why Anglo-Catholics worship they way they do has not – some say “style over substance.” Of course, only certain things have made the transition to the wider Church, as the clip above suggests.
At my parish, St. Paul’s Church on Carroll St. in Brooklyn, we see and we wear such things as copes, maniples, cassocks, amices, and albs. We also have incense and sanctus bells. We genuflect during the appropriate part of the Creed, and all that. This seems so odd that I would be doing such things, coming from my Evangelical upbringing.
I’ve thought a lot about when I am called to a particular church with a free-standing (“west-facing”) altar where I face the people. I don’t want to be and should not be the center of attention, and I think facing the people causes that to happen. The people’s attention moves from being aware of all that is happening from the heavenlies on down to their individual hearts, to what the priest is doing with his/her hands.
I will certainly celebrate on a west-facing altar, but I might have to explain that during times such as Lent that I think I will have to face east with my back to the people. For me, particularly during penitential times, I cannot face the people as if I am separated from them, standing behind the altar. I am one of them and like them, a sinner, and with them all I must face symbolic East towards the source of our forgiveness, freedom, reconciliation, and peace. I don’t know how that will go over.
This high-ritual style of worship is considered a throwback by many of those “in the know” of TEC. “Anglo-Catholicism” has also developed a reputation in the U.S. as being reactionary and angry, very much opposed to the ordination of women and the like. This is not our Anglo-Catholic parish nor most of the others I know of. I’ve come across the good Fathers and parishioners who do fit that bill, however. Frankly, from what I read and experience, a new interest in and a rebirth of ritual can be seen in other religions like Judaism and within civil society in general.
What I read regarding demographic trends particularly among young people, this kind of “church” is a big draw. There is a desire for that which is ancient, tried and true, not trendy, and for a return of mystery. To many young people, the language of God sounds like Rite I old English, looks like traditional church architecture, is represented by clergy who look and act the part, and ritual that is contemplative and not anthropocentric. We see it in our congregation – younger people make up the majority of visitors.
We have something very much in common with our fellow Anglicans in Zanzibar.