Image by Getty Images via @daylife

Dr. Rowan Williams, Archbishop of Canterbury, during Bible studies delivered at the 13th meeting of the Anglican Consultative Council, Nottingham 2005 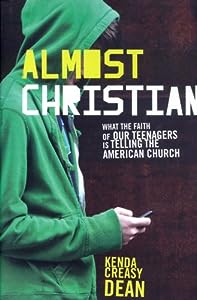 Kenda Creasy Dean in her new-ish book, Almost Christian: What the Faith of Our Teenagers Is Telling the American Church, describes the primary “faith” of American teenagers as “Therapeutic, Moralistic, Deism” rather than a form of the enduring Christian Faith.  This description of the faith-system (as much as it can be a formal “system” at this point) comes out of the results and analysis of the National Study of Youth and Religion project.

Both with Rowan and Kenda, these are pictures of where we are culturally, particularly among the emerging generations, and what is to come within the culture and within our individual lives as believers or not.  How are we ready?

“When you get into a tight place and everything goes against you, till it seems as though you could not hold on a minute longer, never give up then, for that is just the place and time that the tide will turn.”

Great song by “Fatty Gets A Stylist”

For Christianity to offer a true alternative in society, it does NOT mean that we mimic back to the culture itself, though dressed up in churchy garb or verbiage, in order to try to make people feel good about themselves or out of the Church’s collective insecurity regarding the culture.

Here is another one! I am just amazed at what some people have to endure, and yet come to such places.  Then there are others, who seem to suffer little, yet come to nothing. What enables some to do such as this young guy and others to come to nothing or realize not a hint of their potential?

Carving the Mountains from Juan Rayos on Vimeo.